i like to muck around in the memory of these games.

those who are more interested in the ROM may find the binary template repo more resourceful.

there is also a great deal of general documentation and notes on the wikis hosted at CloudModding.

this repo contains a ton of Lua scripts written for version 2.4.2 of Bizhawk. all the scripts you'll want to use are in the root Lua directory, and their dependencies are in further subdirectories. that means, if you want to use a script, you must preserve the directory structure. you cannot, say, extract one file from this repo's archive and expect it to work.

a summary of each script is available in the Lua README.md file, and another for the library files that the scripts use.

of these, you probably came for cheat menu.lua. this script will bind your L button to open an on-screen menu allowing you to control many aspects of the game. 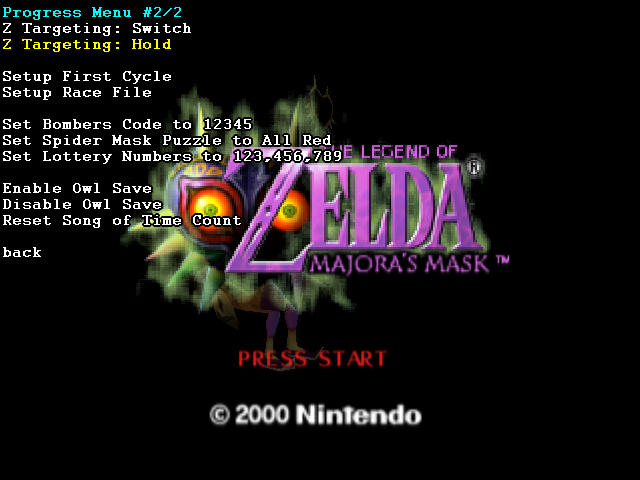 of immediate interest are the classic levitation and run-fast cheats, but also the menu of warps to any area and any entrance in the game. you can also change your Z-Targeting method to Hold in the 2nd page of the Progress menu, in case you forgot to change it in-game.

i have written a handful of ROM and RAM hacks for Majora's Mask and Ocarina of Time. these have all been written in the custom assembler syntax of lips, a MIPS assembler written in Lua. lips is included in this repository; you do not need to acquire it separately.

you only need to run Lua/inject.lua in Bizhawk to run the RAM hacks — that is, modifications that act directly on the game's RAM while it runs; not modifying the ROM.

the versions listed above are rough estimates, and newer versions of software are likely to work fine.

if you're on Windows, and you're not afraid of the (*nix) console, you can set up msys2 to install binaries of bash, python, and gcc. then all that's left is to compile LuaJIT yourself, or you can grab a 64-bit binary built by myself.

last, but not least, you will need the appropriate ROM for the ROM hack. you will probably need to change the hard-coded paths to the ROMs. (note to self: change scripts to take the required ROM as their first argument)

finally, you just run the appropriate shell scripts for the ROM hacks you want to produce. for example:

to compile the C programs, you might need to pass -std=gnu11. basically:

in the future, it'd be nice to only depend on LuaJIT to build ROMs.

cygwin's newline mangling will be the death of me.

some sheets have been put together to dump data in. some of them can be used to predict the result of glitches.